How Ryan Reynolds Got in Superhero Shape for ‚Deadpool‘

For the realist in all of us, pounding out two hours of training in 20 minutes seems like an impossible dream. But if pro athletes like Usain Bolt or elite Hollywood stuntmen are to be believed, that’s exactly what can be accomplished using old technology in new ways.

It’s called EMS, or Electronic Muscle Stimulation, and it has actually been around for centuries as a form of physical therapy. It works by sending low-level electrical currents through your body to stimulate muscles (so following injury, it can help build tone and strengthen muscles). During the past decade, the technology has been making powerful resurgence as a tool in the physical-training realm, primarily in places like Dubai and Germany. At the moment, there has been some clear resistance to this application in the United States from the FDA, though it is believed that it won’t be long before it becomes popular over here as well.

“You can absolutely trust that we were skeptical when we first tried it out,” says Ben Brown, part-owner of a gym utilizing the method called Body Shape Studios. He launched the facility in London’s Surbiton neighborhood in August of last year with friend Bobby Hanton Holland, who works as a stunt double for Chris Hemsworth and Tim Goodall. Since opening their doors less then a year ago, they’ve already been flooded by new clientele, including new Spider-Man actor Tom Holland, who recently made his first appearance as the wall-crawling superhero in Marvel’s Captain America: Civil War.

“I heard about the training method through my buddy Bobby, who was on set with Chris while we were filming In The Heart Of The Sea,” says the young Brit who is currently preparing for the newly titled stand-alone movie Spider-Man: Homecoming. “I do it on top of my gymnastics training, and it’s a lot of good fun. It’s basically this electronic suit that’s put on while you work out, and it seems to be working out really well.” 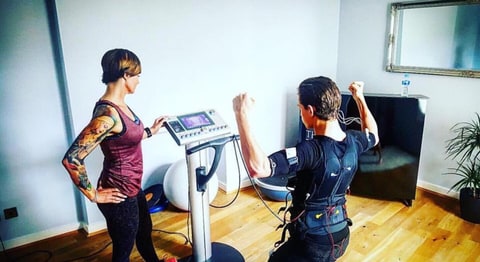 “It is 20 minutes of absolute hell,” laughs Holland. Brown is a little more considerate with his answer: “You are strapped into a suit that covers all of the major muscle groups in your arms, legs, and full torso,” he says. “The machine has the ability to focus on specific body parts, and it sends pulses that contract those muscles 80 times per second. So it can feel pretty intense.” He goes on to assure us that like all new techniques, it is a feeling that you get used to and becomes easier with each session.

How Do You Train?

“We are usually able to get people in and out in about 25 minutes,” says Brown. “Then you go through a fairly typical workout. We use the miha bodytec equipment, out of Germany, and there is usually a set program where you are following an avatar on a screen through the motions. There is a consultant there to make sure that you’re doing all the moves correctly.” Once the client becomes more competent with the suit, like Tom has, the trainer can break them out of the regular routines to take their fitness to the next level.

How Do You Feel After?

“Tom will tell you that the first time that he went on the machine he literally could not walk the day after,” says Brown. “He was left in absolute bits. That was the same way I felt the first day I used it, but your body recovers in a few days. Because it is such a powerful machine, there is the risk of overtraining, so we recommend our clients only do it once a week.”

When Do You See Results?

“Tom was already a pretty lean guy, so it was more about toning up so that he looked extra fit in the suit,” says Brown. “Contrary to what people believe when they first hear about how quick the sessions are, it’s not a miracle treatment. If you want to see significant changes to the body, you need to stick it out for at least 12 weeks, and you need to eat smart while you’re doing it.” That being said, Brown says that clients who did adhere to those basic principles were able to see some tremendous gains, as well as drop a few pant sizes when desired.

But whether or not EMS will make a large splash in America still remains to be seen. In the meantime, Holland makes it clear that while the technology has improved his fitness, like all good training methods, it still takes work. “My mates like to say that I’m cheating, but it’s honestly really hard.”